Good Morning!    I wanted to create something for those of you that like cats.  They are such playful creatures... as you will see in this image that I have for you.

Here's the card I made.   I wasn't quite sure what color the curtains should be but it really doesn't matter... as this is just an example.
I have used prisma pencils.
Cream, red, grey card stock. 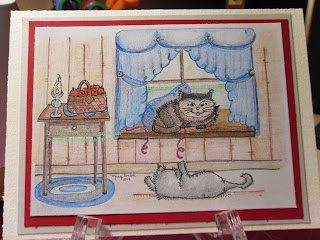 We have a cat, he's 15 years of age...raised him from just a tot, at the age of 6-1/2 weeks.  Fed the little fuzzy thing with an eye dropper.   He was such a cutie pie. We named him, Mudpie. :)
As long as my husband and I have been married, we've not ever had 2 cats together.    We've had just a cat.
I was raised up around kitties.   And used to have such fun watching them at play!   I still remember this... and wanted to capture some of those memories.♥

Thanks for dropping in...

Have a good day! 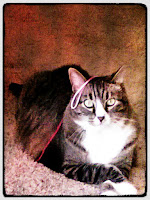 Email ThisBlogThis!Share to TwitterShare to FacebookShare to Pinterest
Labels: cats at play, Mitzy and Gracie

Love your adorable kitties! Thank you so much for sharing your talent! Looks like it will be so fun to color. Your card is wonderful! :) Great coloring!!!

Thank you Edwina. I'm happy that you like the image. :)

Thank you Chi Cr, I'm happy that you like the image, also! :)

Hello and a warm welcome to Challenge 38! Before we get to today's new challenge, we need to let you know the winner and top 3 from our...

Visit my other sites too!

We are listed on:

Looking For A Sponsor??

We would love to Sponsor your Challenge! Please send an email to Mary. createfulheartdesign@yahoo.com 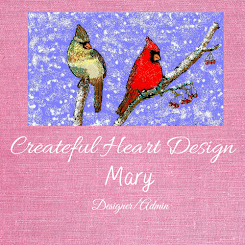 Inspiration from our DT members